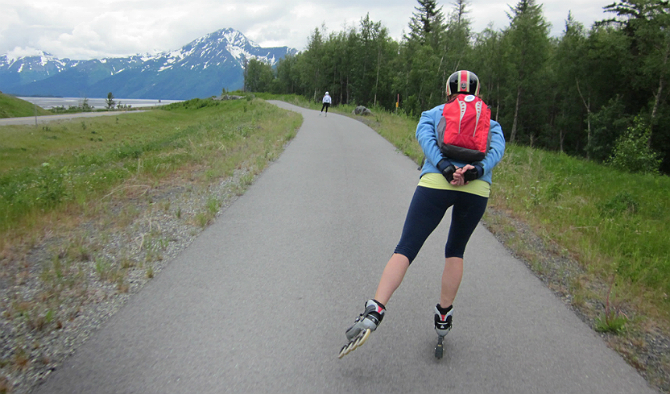 It might be short on facts and statistics but getting an article in the Wall Street Journal titled “Redesigned Rollerblades Worth Lacing Up” is a positive sign for the resurgence of inline skating. (You can read the entire article without a paywall on this site.)

It is certainly true that the skates and wheels are much better now than they were at the beginning of the inline skating boom. It is also true that for someone who knows what they are doing, inline skating is a fast, fun workout and nothing close to being dorky.

Not only do I not consider inline skating dorky but I don’t think the public does either. After all, women all over the United States now wear yoga pants to pretty much any type of event. And no one is going to put leg warmers on to lace up skates!

But skating does have challenges. The two I find the biggest are a lack of good paths and an inability to stop. Of course, neither of those kept people from skating back in the heyday but a nice, smooth path and the confidence of knowing you can stop when needed goes a long way towards making the sport of inline skating enjoyable.

We at Zephyr Adventures, of course, never quit. We have two inline skating tours this year, one this month on the outstanding paved paths near Dayton, Ohio and a second in July in our original location of The Netherlands.

Perhaps next it will be time to revive our Camp Rollerblade where we teach adults to inline skate.

(Thank you to long-time Zephyr customer Rick Otis for pointing us to the article in the Wall Street Journal. Rick and his partner Tony joined us on our Netherlands skating tour way back in 1997, our first year.)

One thought on “Is Rollerblading Making a Comeback?”