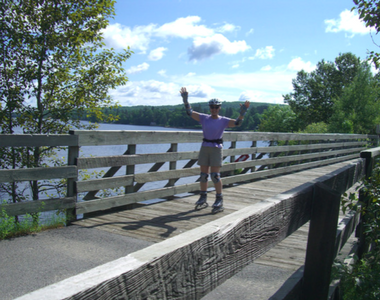 We ran our very first Québec skating trip in 2007 – ten years ago! Over the years, we have refined the itinerary of this adventure and now spend two nights at a posh resort in the ski town of the Mont-Tremblant, surrounded by vast forests and the Laurentian Mountains, followed by two nights in the cosmopolitan city of Montréal, right in beautiful Vieux-Montréal, the oldest section of the city.
There are many things that endear this tour location to us, but it isn’t the French fries, French toast or French kisses that make this top three list. It isn’t even the poutine! Here’s our top three:
It’s like visiting Europe without the long flight. Québec is a predominantly French-speaking Canadian province with history dating to the 1600s. Montréal is a slice of old Europe, with the flavors and textures of a city that is decidedly non-North American — cobblestoned streets, parks, city plazas and beautiful old churches — makes it feel like you are in Paris, not Canada. And flights from many East Coast U.S. cities to our meeting point of Montréal is less than two hours (and from Los Angeles, only five hours)!

Trails. Trails. Trails. We start by spending two days on a 200+-kilometer long converted rail trail called the P’tit Train du Nord (only 94 kilometers are paved, and yes – one crazy Zephyrite named Igor has skated them all!) that is surrounded only by lakes, rivers, and trees. We are truly “up north.”
We then transfer to Granby, a town outside Montréal, and enjoy another rail trail called L’Estriade. This paved path takes us through farmland, unique sculpture gardens, and alongside plenty of locals who bike with radios mounted to their handlebars — enjoy the music!
After that, we move to an urban circuit in Montréal through several stunning city parks and alongside the St. Lawrence Seaway and the Lachine Canal. Our last morning is spent doing laps on the Formula One Racetrack, which is open to non-motorized wheeled traffic when races are not taking place. These starkly different trails add up to five days of absolute trail bliss.

The area is equally good for skating and biking. Skating is a sport in decline, sadly, but Québec is one of the last holdouts, so you’ll see many people propelling themselves on eight wheels when you visit. However, if you, like many other former die-hard skaters, are no longer feeling confident about your ability to spend five days in your skates, you can rent a bike for some or all of the trip. As you are probably already aware, cycling and skating have many benefits: maintaining an active lifestyle keeps us young, getting outside keeps us happy, and sharing time with other like-minded folks on the trail keeps us connected. All these things contribute to an overall healthier lifestyle.
Want to experience Québec and discover city neighborhoods, small villages, and hidden gems that one can only experience at a human-powered pace? Our next Canada: Montreal & Québec Skate Adventure takes place June 25 – 29, 2018. Join us! Oui, wheeeee!