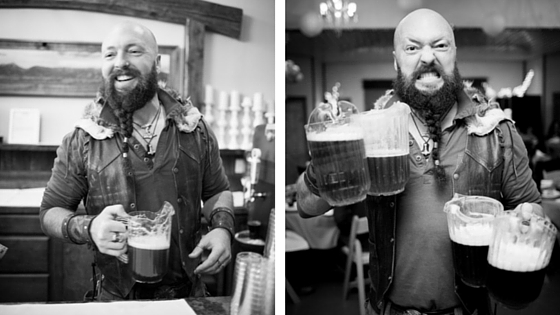 Main photo credit: Zak Jokela
Meet Doug Bailey, resident Beerbarian for Zephyr Adventures and Red Lodge Ales. Doug is a bit of a jack-of-all-trades.  Not only does he know his beer, but he can teach you how to snowboard, wrangle a horse, navigate rapids, and make a mean cocktail, all while wearing a kilt. We had a chance to catch up with Doug to talk about his love of beer, his intriguing past, and what he’s up to next.
Prior to joining forces with Zephyr Adventures as a guide and Red Lodge Ales as a salesman, how did you get your start? I went to college for 2 years in the late 90s, then began my years of wandering, all over the globe. Eventually, I woke up in a horse stall in Ireland with a hang over and decided I should probably go back to college. I finished up in 2008 with a degree in horse training and ranch management. Over the years, I have been a guide in many places doing a variety of things. I was a wrangler on a dude ranch in Wyoming, a whitewater raft guide in Montana, a snowboard instructor and bar tender in Alaska, a horse back trail guide in Hawaii, and I have managed bars and restaurants over the years. And just before starting at the brewery, I had been managing a working horse ranch.
What is one of your favorite moments from guiding beer tours? On the Greater Yellowstone Multisport & Beer Adventure, the night hikes around Old Faithful are some of the best. It’s a truly magical time to be out there. It’s so quiet, simply breathtaking.

Okay, we have to ask – what’s with the kilt and how did you become the Beerbarian?  I started wearing kilts for the occasional event years and years ago. But in 2009, I saw a utility kilt online and thought it looked awesome. I also compete in Highland Games in the summers in Montana, and a utility kilt seemed like just the thing for such events. I bought the kilt, and wore it out a few times, and liked the way it looked and how comfortable it was. Eventually, I had to get a second one because I was wearing it so much.
And because I find myself

in fun, adventurous situations, or in front of large crowds quite frequently, there were often really fun photos of me that would show up, and I ended up being in their catalog!
Once I started selling beer, people began calling me The Beerbarian because of my huge braided beard, kilt, and viking-like style. It stuck and it makes me pretty hard to forget, so bar and restaurant owners tend to remember the beer guy in a kilt.
You have a pretty enviable dual career as a beer salesman and an adventure travel guide. What do you think makes you a good beer guide? Having been a tour guide since I was 18, a fan of craft beer since I was 19, and a brewery rep for 7 years, I have led a uniquely qualifying life for being a guide for a beer adventure tour. I love getting people to try new beers and new experiences, and I really look forward to each and every one of my beer adventures!
And on the flip side, what makes you a great beer salesman?

I think I am just the loudest. Ha! Since I’ve been a tour guide for most of my life, and I have never had a problem standing in front of a bunch of strangers and talking, so I end up doing a lot of events for bars and restaurants. I tend to do them bigger and louder than the other beer guys in the industry. That and the way I look with my kilt and beard makes me pretty easy to remember, so it’s kind of like cheating.

Join the Beerbarian on an Epic Beer Adventure

What’s next on your personal beer mecca bucket list? At the tip top of my list would be Bamberg, Germany where Rauchbier originates. Rauchbier is beer brewed with smoked malt. It is one of my favorite kinds of beer. There are 9 breweries in this small town, and they each have a version or two.  I love trying different fermented beverages from all over. I’d also love to get to Norway for some mead, and Mongolia for some Airag (fermented mare’s milk)!
Beer aside, what do you like to do in your free time? I love hiking, throwing axes, brewing mead, fly fishing, sword fighting, and Viking Folk Metal music. But my favorite thing in the world is hanging out with my wife and 5-year-old daughter. They are the light of my life. Fortunately, they enjoy taking hikes and watching me sword fight.
You can join the Beerbarian and fellow beer adventurers on two trips this year:

One thought on “Epic Adventures with a Real-Life Beerbarian”