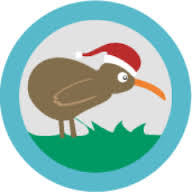 The month of December is celebrated in many different ways, shapes, and forms around this big world.  Prime rib roast feasts, Hallmark Channel reruns, and flocked Christmas trees are typical in the United States in December.  But what about the other countries out there whose holiday traditions can vary greatly compared to our own?

Take New Zealand, for example:  Where the color red symbolizes the phohutukawa tree with its brilliant, red blooms.  The color green represents the lush, tropical vegetation found on many parts of this island country during this season.  And white clearly conjures up images of pristine, sandy beaches.  Aaaahhhh…Season’s Greetings from New Zealand where it is Summer and the weather is warm in December.

For starters, the phohutukawa tree really is red in December!  Its cylindrical flowers bunch together to look like a twinkly, holiday light parade of lights.  An iconic symbol of kiwi Christmas, this tree also resonates as a symbol of blood in the Maori tradition.  Legend has it the young Maori warrior Tawhawk fell back to earth after falling from heaven while seeking to avenge his father’s death.

The main stay of holiday fare in the North Americas, the prime rib roast, is replaced by “barbie” in New Zealand.  Can you imagine grilling leg of lamb and nibbling on veggie kabobs in your flip flops on Christmas?  Yes, please…

The kiwi, the world’s only national bird who is flightless, is often found as a holiday tree topper in New Zealand.  Its odd shape (stocky legs, round body and long bill) made this bird and easy caricature in the early 20th Century.  Also thought of as a special bird in the Maori legend, feathers from Kiwi birds were reserved for Chiefs and members of rank.

Sledding before AND after dinner is reminiscent of my childhood growing up in Washington State but Kiwis don their bathing suits in December.  With over 9,000 miles of coastline, New Zealand’s access to the beach is awesome.  The waves on the eastern side of the country are typically calmer and the beaches typified by white sand.  A different story on the western side which has many black sand beaches and rougher waters with the onslaught of the Tasman Sea.

While it’s hard to image an entire country celebrating the holidays in shorts, New Zealand’s position south of the equator allows it to do so in style.  Our next Season’s Greetings shout out is about December in Spain.  Until then:  Ngā mihi o te Kirihimete ki a koe...