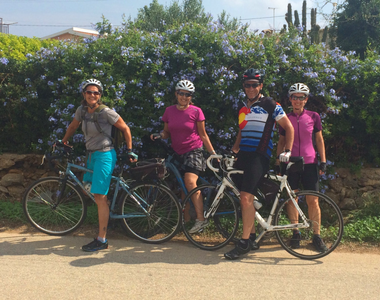 E-bikes have been around since the late 1800s but it is only in the past few decades that they have become widely available. Then, during the pandemic, bicycling boomed and e-biking boomed along with it.

What is an e-bike, you ask? The “e” stands for electric. You might imagine a scooter or electric motorcycle, but e-bikes are like regular bikes with the addition of several electrical components (a battery, motor, and the corresponding controls) integrated into the design.

They have also become increasingly popular on our biking tours, for multiple reasons:

You still need to pedal an e-bike, and they handle mostly the same as a regular bicycle. The “e” is meant to supplement human power, not replace it – the motor is only activated when the pedals are moving. This allows the rider to still get a workout but makes obstacles like hills and headwinds much easier to manage.

We first used e-bikes on a biking tour in Sicily in 2017. I rode an e-bike the first day of the trip and got a good feel for how they worked:

On that Sicily tour, I also asked riders to give me the real-life pros and cons and compiled this list.

Battery: If you don’t remember to take the battery off your bike each evening and charge it, sorry – you can’t ride the next day! (Note: fortunately, this didn’t happen on our trip, but we will likely carry extra batteries on future trips, just in case.). Just as with electric cars, there are also limits on how far an e-bike will go without a charge – approximately 75 kilometers.

The bike is heavy. Quite a bit heavier than a regular bike. While riding the e-bike, this isn’t an issue. However, it is difficult to carry up stairs (we had to do this at a couple of our hotels), get it in a van, or – if the battery runs out – push it up a hill! (Again, this didn’t happen on our trip!)

An e-bike can’t be left out in the rain. But, we wouldn’t want to leave our regular bikes out in the rain, either! The somewhat sensitive electrical components of an e-bike make this more of an issue. Most times we store our bikes indoors, but the one day they were stored outside, it did rain lightly, so we ran to the grocery store to get plastic wrap to cover the sensitive bits.

“Cheater!” People on regular bikes will actually yell this at you as you pass them on the uphills. It makes you feel a little guilty. But not much.

Speed. You are governed by a specific speed on downhills. For people like me who like uphills more than downhills, this is a non-issue! I was going plenty fast on the downhills and still felt comfortable taking my eyes off the road a little to look around.

Easier on your body. Because the pedaling is easier, an e-bike helps take the strain off your knees and other body parts affected by hard pedaling.

Easy to learn. With a five-minute training and five minutes of riding, you pretty much have it down on how to ride an e-bike.

You can choose the amount of help. Most models of e-bikes have several settings for assistance from almost none, all the way up to Turbo, where the bike practically pedals itself.

No fear and better group dynamics. On Zephyr tours, we cater to a wide range of abilities and offer several route distances and difficulty levels each day and actively promote going your own pace. Normally, the faster cyclists and slower cyclists don’t see each other most of the day. Nevertheless, one of the big fears on group trips like ours is “Will I be able to keep up with the group?” and conversely, “Will I have to wait for the slowest person (or my spouse/friend)?” E-bikes are great equalizers, allowing people of differing abilities to bike together. On this trip, most people cycled the same route and nearly the same pace so had the opportunity to interact much more along the ride each day. We think this makes it way more fun!

No riding in the support van. Normally, we guides spend a good part of the day loading bikes and bikers into the support van when people have had enough cycling for the day, so we can bring them back to the hotel. I was amazed at how little of that we had to do in Sicily! Everyone wanted to keep riding. The “short route” may be a thing of the past on an e-bike.

Focus on sightseeing. When you don’t have to focus so much on pedaling so hard, there is more opportunity to see the sights around you and enjoy your vacation. You also have energy at the end of the day for exploring the town by foot!

Our High Roller and seasoned Zephyr traveler Pat Knauss said it best, I think: “There is no con that outweighs the ability to go up hills like this!” Your next opportunity to try out an e-bike for yourself is our May 13 – 21, 2023 Across Italy E-Biking and Biking Adventure!