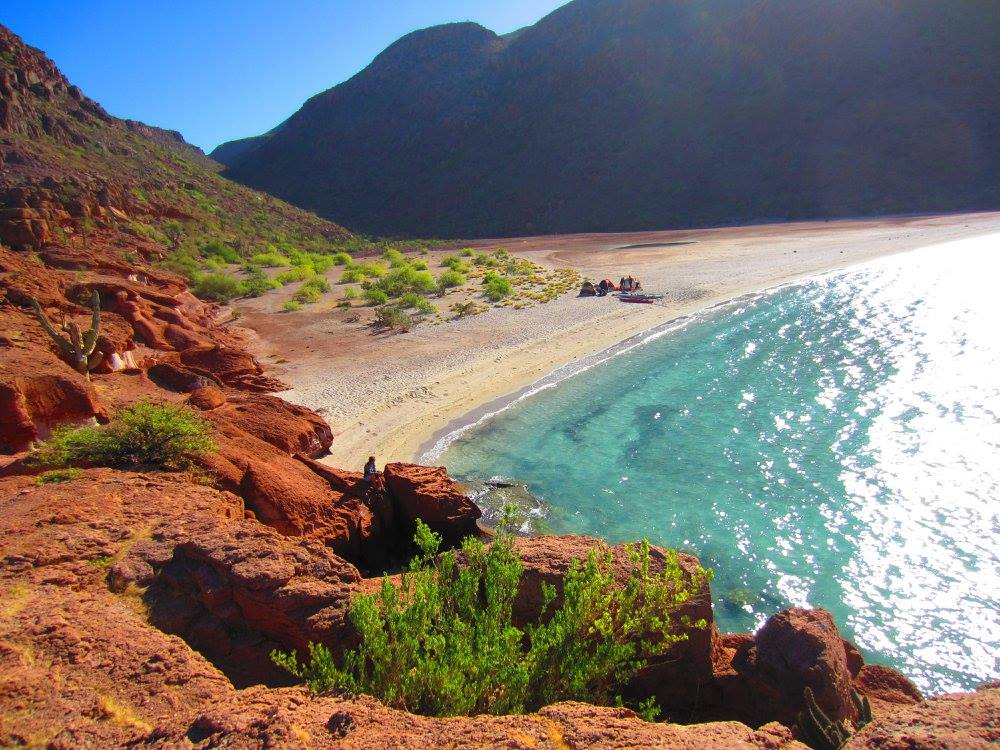 It has been ten months since I returned from Baja California Sur in Mexico but I have been dreaming of going back every moment since. For someone who grew up playing in the lakes of Minnesota, spending time in the warm waters of the Sea of Cortez was like a dream come true for me. Three experiences, in particular, stand out from my time there last December…

We took a sunset paddle over to an adjacent bay one night to look for green sea turtles. Once we arrived in the large bay, we were all instructed by our guide Chino to stop paddling, be perfectly silent and just drift as a pod of kayaks. Silent moments are rare with a group! We all held it in and waited.

While the light faded and the water was bathed in an orange glow, we began to see large turtle heads breaking the surface in various spots around us, and with the surfacing came a unique popping and inhaling sound I will never forget. Occasionally we would see more than a head – a flipper here, a tiny splash there – but always, that little inhale as their heads broke the surface. It was magical and were it not for our intentional silence we would have totally missed those moments with our talking and movement.

When true sunset was upon us, we paddled back to our beach camp, still in silence, and I purposely paddled as slowly as I could, wanting to prolong the experience and the sunset. At some point, the sky turned periwinkle and I saw my first star of the night. A group of three pelicans flew by within feet of my kayak and in the silence, I could hear each individual wing beat. I paddled slower. A fisherman’s boat puttered gently home, a dark silhouette in front of me. As I headed into our camp bay, I turned to look west, behind me. The rugged mountains of the peninsula across the vast stretch of water jutted up in the distance and above them was a bright orange band that faded up into the night sky. By the time I was ashore and was handed a margarita by Alvero, our jolly camp cook, the sunset was in its full glory – and I swear it lasted hours. I was beyond speaking, captivated by the longest. Sunset. Ever.

After making camp one afternoon, our boat driver, Ricky, and Chino offered to take those of us who were interested by motorboat out into our shallow bay to a small volcanic island where we could snorkel. Everyone put on their wetsuits, but to me – I like to plunge into freezing alpine lakes! – the crystal clear water of the Sea of Cortez felt like a bath and I needed no protection from any perceived cold and dove right in.

As soon as my face was pointed toward the ocean floor, I could immediately see huge schools of fish and they swarmed around me, gracefully eluding my touch even though they were millimeters from my fingertips. I swam around the circumference of the rocky island, taking in the totally different world under the surface of the water, hovering in places where I could see nothing. Within a few moments of being still, I began to see colorful fish darting in and out of rocks, or imperceptible movements that, when focused on, delivered glimpses of shyer species of fish that I would have never noticed had I kept propelling myself.

When I returned to the boat, I was not ready to get out of the water and told them I would swim back to camp. “No, it is too far!” they said. “It is a lot farther than it looks!” I looked up at my husband from the water and he laughed and told them, “You don’t know this lady – she is part fish!” Ultimately they relented and let me go. I kept my fins and snorkel mask on and because the bay was shallow, the water was clear, and the sand was white, I was able to see EVERYTHING in the water on the way back. I made a beeline for shore, secretly hoping I would beat the boat back. As it turned out, we hit the beach at the same time, but I was exhilarated and out of breath. And grinning from ear to ear. What a swim that was!

Our first day out on Espiritu Santo Island, we were taken by motorboat to our first camp, where we settled in and learned our camp routine, had lunch and set up our tents. We then went to the north shore of the island, again by motorboat, and a nearby rocky island that housed a wild sea lion colony, where we would be able to snorkel.

After the safety briefing, we all dove in and started to snorkel along the shore. Yes, there were fish, but soon after, there were juvenile sea lions who came out to investigate this odd group of swimming creatures (us). Chino had told us that if we could make eye contact with them, they would try to engage us in play. One of these cute little guys singled me out and started circling me and spinning around me, faster and faster. I tried to mimic him and tried to maintain eye contact and I could see he appreciated my efforts, which made him go even faster, weaving in and around our group of swimmers, but always coming back to me. He was like a large underwater puppy, with big wet eyes and snout whiskers that I wanted to reach out and tug on. He was close enough to touch but I resisted (you have no idea how hard that was for me!). It was unforgettable to have that experience with a wild animal.

One thing we missed out on last year – due to high winds that day – was our planned swim with whale sharks. Whale sharks are the largest fish in the sea but lest the word “shark” strike terror in your heart, these gentle giants eat plankton, not large mammals like us. This year, we planned our Mexico: Baja Kayak Adventure, when the winds are traditionally not as high, so chances are very good that I will get to experience this highlight in March.

Did I mention I can’t wait to go back to Baja? Join me!

2 thoughts on “Baja, a true paradise for water lovers”