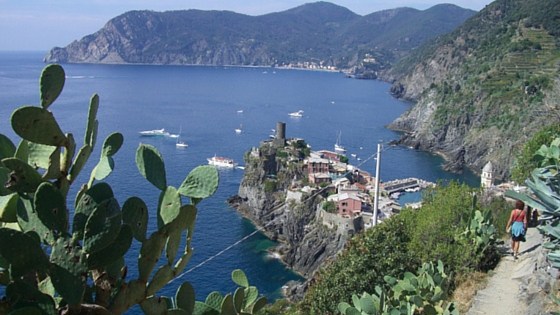 Known for its slow pace, breathtaking sea views, and lovely and antiquated architecture perched on impossible peaks, Cinque Terre is a little slice of heaven for many a traveler. Kerry Dopler, one of our bright and friendly guides, will be co-leading (along with Giovanni) a group of adventurers on the Tuscany & Cinque Terre Bike & Hike Adventure this fall. Cinque Terre made quite an impression on Kerry during her previous travels there. We asked her to share her experience below:

I have always been enchanted by Latin America: the culture, the cuisine, the rich history, dancing all night, late dinners and street food. This was until I visited Europe and, more specifically, Italy. I swear Italians know the secrets of living life to the fullest more than any other nation out there – please feel free to rebut. Why, I wonder, do they know to take the time to swirl and sniff wine before you drink it, to breath in the countryside before you descend it, and to walk from town to town using only your legs as has been done for centuries.
No cars can fit in the Cinque Terre (meaning five lands or five towns). The towns are literally connected by the most beautifully kept paths. These caminos meander through each stunning town, up to breathtaking views, and down around vineyards and gardens belonging to ancient people who stand at a height of 5 feet (on a good day).
While I was there in 2013 some of the paths had been washed out and were still in repair, therefore I chose to walk the path much less traveled and found myself often all alone, stumbling into personal gardens and meeting the nicest and perhaps oldest people I have ever encountered. Regardless of their age or hardships, they were smiling and working outside in the sunshine, tilling the land and waiting for their grapes to ripen so they could make wine to enjoy as they have done for generations.
I realized then that this path does

more than provide exercise and great views; it allows one to contemplate the meaning and passage of time. I was walking along paths that date back to the 11th century, meeting people whose way of life had not changed in hundreds of years and, I thought to myself – Who is to say that time has not stood still here? Time has never been more irrelevant than it is in Monterosso al Mare, Vernazza, Corniglia, Manarola and Riomaggiore.
The Terre (land) speaks to you here. It has stories to tell of days past when the villagers had to hide in the hills to avoid the prevalent raids of pirates and buccaneers. For this, houses were built into cliff sides and lonely watchtowers still line the horizon in a sporadic, chilling manner. These houses were colorfully painted by fishermen who worked offshore and wanted to be able to keep an eye on their house (and maybe their wives) more clearly from the distant seas. Every stone, hinge and piece of focaccia has a story here and they are more than willing to share these historical delights if you simply open your eyes, ears and heart to the infinite possibility of the past that is also the present, only here in Cinque Terre.
Interested in explore Cinque Terre with Kerry this September? Check out the Tuscany & Cinque Terre Bike & Hike Adventure tour page for details.
And if you’re interested in additional perspectives on Cinque Terre, check out these articles: