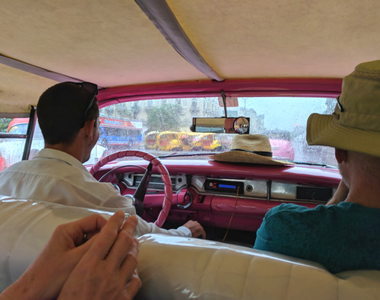 As a U.S. citizen traveling to Cuba, your trip must fit one of 12 categories laid out by the U.S. government. For Zephyr, our Cuba adventure falls under the educational category of a people-to-people exchange where we specifically schedule in time to meet with local Cubans, learn about their history and culture, and discuss their point of view. We had many scheduled people-to-people encounters that were impactful but nothing beats real life, unplanned incidents.
When our planned guided bike tour of Havana got rained out on our last day of the trip, we opted for a classic car tour of Havana’s notable landmarks. Three Zephyr alumni and I climbed into a pink ’56 Buick Roadmaster (second car in the photo). The other group rode in a’49 Ford (first car in the photo).

Our driver was incredibly nice and spoke English very well. He not only told us about the history of the different landmarks throughout the city as we drove by them, but he shared his own personal story. We had an engaging conversation about what life was like growing up in Cuba during the Special Period and what it is like now for his family.
We also discussed how the car we were riding in was his livelihood – a great source of pride. His father-in-law and other members of his family had pooled together their money to purchase the car for him to drive and support his family. He personally cares for and maintains every inch of the car – including the cobbled together auto parts that are quite precious and hard to find in Cuba.
We were just about to conclude our tour when we pulled up to a stoplight alongside the Malecon (Havana’s iconic seawall) … and the car broke down… in the furthest left lane of the street.
Our driver was visibly embarrassed and was trying to quickly figure out what went wrong.  He had tried to signal the other car that was touring with us but they did not see him in time. We sat there for quite awhile, trying to figure out what to do.
It was one of those times you realize how technologically connected we are in the U.S. – we couldn’t just pick up our cell phones and call a friend or tow truck to come pick us up.
My fellow passengers and I offered many times to help push the car to a side street nearby but our driver was mortified and worried about us getting wet in the torrential downpour on the busy street. We were finally able to convince him that we sincerely wanted to help and that we didn’t mind getting rained on.  We then hopped out of the car – two of us pushing, the driver steering, and the other two stopping traffic.
We successfully navigated to the side street where we waited under a leaky awning while the driver cranked up the car and dove underneath to figure out what went wrong. We were so happy that he was able to fix his car – not for our sake, but because it meant that his business could continue to run.
That two hours or so of time that we had together, learning about this man’s life, family, and ambitions, was one of the most memorable and moving moments of the entire trip. Though our other scheduled people-to-people experiences were remarkable and interesting, this encounter was certainly eye-opening and one that will stay with me for a long time.

5 thoughts on “Breaking Down On The Malecon: A Real Cuba People-to-People Experience”