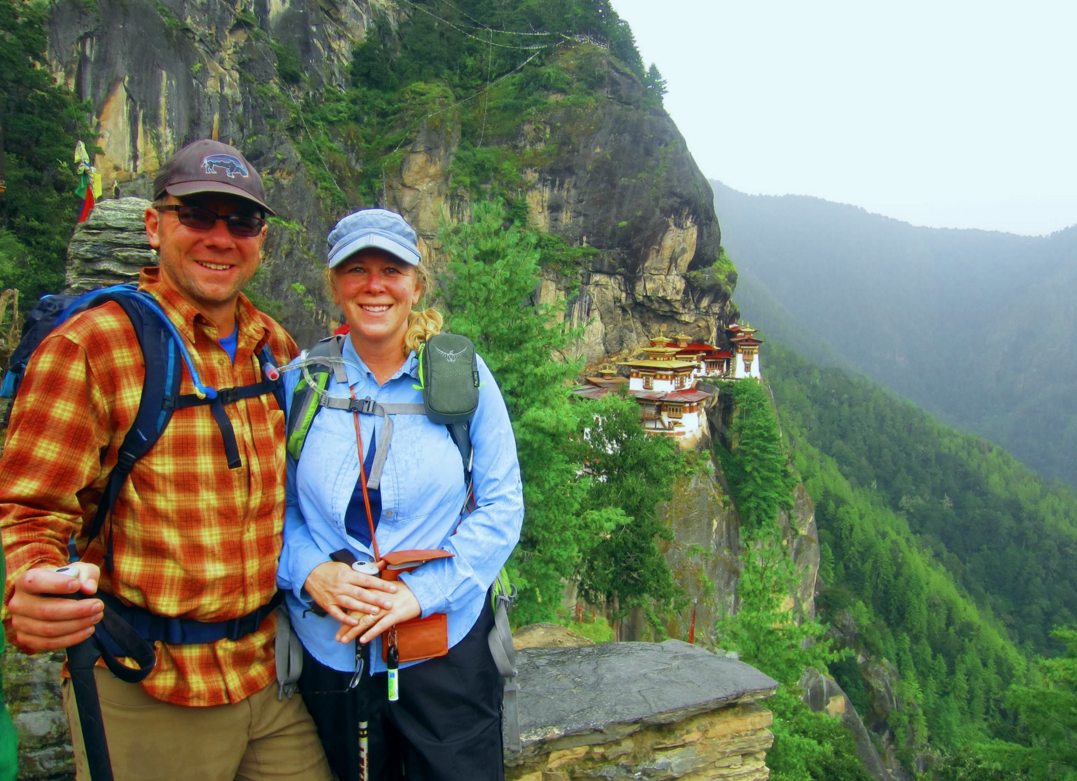 This post was written by Michael Keys, a Zephyr guide and the husband of Zephyr’s Head of Operations, Kris Keys. Michael joined Kris – who was the trip leader – in Bhutan last fall as a tour guest, and will be returning this coming fall as the Zephyr trip leader.

When Kris told me that Zephyr had added a tour to Bhutan, I could barely contain my excitement and immediately booked the trip. My whole life, as far back as I can remember, I have wanted to visit the Himalayas: Nepal, Tibet, Sikkim, Bhutan, it didn’t matter. But, Bhutan was definitely my first choice. It has always held such mystery for me. I have not been to Nepal, Tibet, or Sikkim, but I imagine that Bhutan is where those places were 40 or more years ago.

Though we were trekking through the Himalayas, the hardest part of my visit was getting on the plane to leave. Bhutan touched me—the people, the land, the energy. It has such a beautiful landscape, rich in history and ancient customs and a culture of people who are truly kind and very appreciative. I struggle to find the right words to explain it properly but I could write a small book about how I felt while I was there and what I loved about this amazing kingdom. However, I will instead share with you one of the most special moments that happened to me on the trip.
On the last day of our trek, as we were walking down to the town of Thimpu from the mountain monastery we had camped near, a young monk in his traditional dress came up behind me on the path. I was walking with several others and we were moving slowly – the trail was steep and the rains the night before had made the trail very slippery. Yet, the monk seemed to be sailing down in his thin sandals. As the monk caught up to us, he slowed and stayed behind me. I stepped aside and motioned for him to go past. He kindly declined and with his hand, gestured me to continue on. I did so. He then walked beside me, eager to start a conversation, and introduced himself as Dawa.
Not far into our walk, he pointed at one of the women

in our group, and asked me, “Is she sick?” and tapped his chest saying “Here?” I told him yes, she is battling cancer and had recently undergone chemo again. “She is strong,” he said and I agreed, since she had just completed a difficult trek, despite her condition. I could see him thinking and taking that in.
A few minutes later he looked at my wife Kris, and said, “She is very happy, very kind.” I, of course, agreed. Anyone who knows my wife knows this to be true. We chatted about many things— life in the U.S., life in a monastery, his family, his work as a monk, and how many times he walks the 5+ miles one way to Thimpu to get groceries and see his mother.
He walked with me all the way to the bottom of the trail and then thanked me for allowing him to walk with me. That hour-plus walk touched me like nothing else in my life. The absolute genuine appreciation, keen observation, and thankful sincere attitude exhibited from such a small exchange filled my heart. That is Bhutan.
If you have an interest in experiencing the completely unique culture of Bhutan, I can tell you this: Go soon – because inevitably, it is changing.

Because of its (until recently) isolationist policies, Bhutan had been largely uninfluenced by the rest of the world, which is what makes it so unique in this day and age. Most people are still very traditional. Sure, it has bustling and thriving cities, but they are still “quaint” by American standards. However, this is rapidly changing with new hotels, modern bars and restaurants, roads, and automobiles. The influence from outside the borders is undeniable.
Not everyone wears the traditional dress anymore. Western fashion is getting a hold. Televisions and internet are gaining traction (many of the checked luggage pieces on the flight from Bangkok to Bhutan are big screen televisions and it seems that every monk is glued to his iPhone), but you will still see ancient Bhutan and the beautiful Bhutanese people that I fell in love with.
Dawa and I have exchanged emails and I am hoping to be able to see him again on the Bhutan: Himalayan Trek & Cultural Adventure this coming October 2016 (read Michael’s trip recap here). He is a young man, so I expect he will have changed a bit, just like the rest of the country.