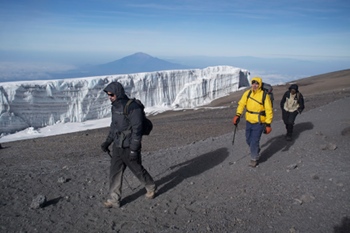 … followed by a hell of a slog. I promised Zephyr’s Facebook page fans I would give this blog post that name and it does more or less reflect our experiences on Mount Kilimanjaro.

Ten hardy Zephyr alumni joined our first-ever trip to Tanzania to climb Mount Kilimanjaro. We all met in Moshi, Tanzania after a very long flight via Amsterdam on KLM. Tanzania was hot but the Kilimanjaro-brand beers were cold and the view of the mountain from our hotel windows was outstanding.
Our route was the seven-day Lemosho Route, which to me is the best route of six up the mountain. Most people take either the five-day Marangu Route or the six-day Machame route but the Lemosho Route provides days of fantastic trekking with few others around and a more gradual ascent of the mountain.

In fact, I was shocked at how nice the trekking actually was. My most recent mountain climbing experience was on Aconcagua, where I spent 13 days on the mountain with two friends and found most of it a chore. This was different. For one thing, the scenery was very pretty and we all enjoyed our climb through a tropical forest, rugged open moorlands, and finally an alpine desert environment.
It also made a difference that we were pampered on this trip. The Tanzanian government has smartly instituted restrictions on climbers, requiring everyone to get a guide and most to use porters. Our group of 11 had – are you ready for this? – one lead guide, four assistant guides, two cooks, two servers, two camp staff, and 28 porters for a total of 39 Tanzanian support staff!

This might seem excessive but pretty much everyone on the mountain is traveling in a similar style. Our group had a cooking tent and eating tent, tables and chairs, and food for 50 people for a week. Our guides were excellent and the porters, who are heroic, carried 20-kilo (44 pound) packs, often times on their heads!
Our seven days on the mountain can really be broken into three phases: five days of pleasant trekking, one horrendously-long summit day, and the final morning exit. (I believe other, shorter routes up the mountain are harder and less pleasant on the initial days.)
The crux of the whole week was the summit day. Because our group was moving at different speeds, we broke into two groups. We had been going to sleep earlier and earlier all week and the evening before the summit climb most of us dropped off to sleep by 7:00 PM. Group A then woke up at 11:00 PM, grabbed a light breakfast/snack, and started for the mountain at midnight. It was cold but not excessively cold. Worst was the wind, absent all week, but which now decided to make an appearance with continuous blasts.

Group B, which I joined, woke at midnight and started at 1:00 AM. To get an idea of how fast we hiked up the mountain, walk across the room at home or at work. Now, do it again at half pace. One more time, cutting your speed in half again. Because of the high altitude and lack of oxygen reaching our systems, that is the pace we moved. Even then, the summit hike was difficult. The strong wind made things miserable, some in the group felt nauseous, and all of us just wanted to get to the top. Still, there were no technical parts at all and so willpower was really the name of the game.
The plan worked well and our two groups merged together just before the crater rim. The sun rose on our right, a beacon of light convincing us the night was not actually without end, as we had feared. We eventually topped out on the crater rim and none of us considered turning around at that point, with only 45 minutes remaining to reach the high point of the mountain along a gradual ascent on top of the crater rim.

Finally: success at 19,340 feet above sea level! Of course, like most mountains it was freezing on top and most of the group suffered through a quick group photo before heading down. I did stay on top for 15-20 minutes, taking photos of others and making sure our group was okay. In all, 10 of 11 of our group made it to the top, with only one person having to turn around early on the summit climb. (I am convinced this was due to a bout of traveler’s disease earlier in the week, which can sap one’s energy.)
My conclusions? First, the mountain is worth climbing. In addition to some excellent trekking, the opportunity to summit the Roof of Africa is something you should not pass up. Second, this is achievable by many people. Our group of experienced Zephyr alumni aged 17 to 61 was strong but many others can succeed as well. In fact, if we have enough interest, we might change the 2011 itinerary to include eight days on the mountain, which would make the summit day that much easier. Third, you should travel with Zephyr Adventures! I was very impressed how the service provided by Zephyr and our local staff was equivalent to that of other, more expensive operators. In fact, on the plane ride home one of our climb participants favorably compared her experience against that of someone who joined one of the more famous Kili outfitters – this outfitter costs 50% more and doesn’t even provide an American guide on the trip!
We will set our 2011 trip date soon, so let me know by commenting here if you wish to join us next year. Coming soon – a post on part two of the trip, the safari!

One thought on “Mount Kilimanjaro: Six Days of Wonderful Trekking …”